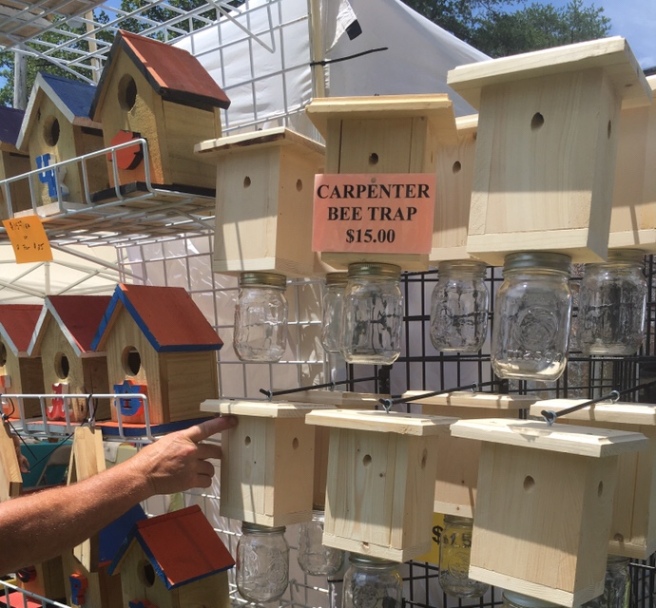 Among all the pickled okra and scroll-saw-carved logos of SEC teams at the recent Monteagle Mountain Market for Arts & Crafts, one Tennessee craftsman was selling what appeared to be not-very-good bird feeders. Upon further inspection of the wooden boxes, my 12-year-old realized they were actually ingenious carpenter bee traps.

“The 45-degree angle is the key,” the craftsman explained, pointing to the tiny slanted portholes that were too small for birds to enter. “Carpenter bees are opportunistic insects,” he added. The bees climb up the 45-degree slope, into the box, where the angle of the holes prevents light from entering. The only light for the bees to follow comes from a hole in the bottom of the box. Here’s the fiendish part: That hole leads to a glass jar, where the bees get disoriented and exhausted until, well…

As timing would have it, my husband’s birthday rolled around after we returned to Nashville. I was racking my brain for an appropriate gift, when it hit me: Mr. Buttercup has a carpenter bee problem. (To be fair, the carpenter bee infestation at our house is just as much mine as it is his, but for the purposes of birthday shopping, those borers belonged to the birthday boy.)

Despite the fact that our murderous craft project was about as cheerful as Iain Banks’s haunting novel The Wasp Factory, I was smug about my à propos present for a man who fixates on carpenter bees as much as my husband. I mean, he rarely enters our kitchen without remarking on the damage, which looks like someone has used our back steps as target practice.

“You found the perfect gift,” I said, praising the son who spotted the carpenter bee traps at the craft fair.

In return, the boys sweetly praised my rough woodwork. Then one of them said, “There’s just one problem…”

Doh! He was right. For as much talk as there is about the carpenter bees at our back door, it’s all complimentary—so much so that if the stairs collapsed while the bees hovered nearby giggling their fuzzy butts off, my husband would go out of his way to praise their persistent precision. Maybe a bee destroyer wasn’t the perfect gift after all.

All’s well in the end, though. When we delivered our craft project, the birthday boy appreciated the effort. And when we hung the trap by the back steps, the carpenter bees took no notice whatsoever.

6 thoughts on “Happy Bee-Day to You”