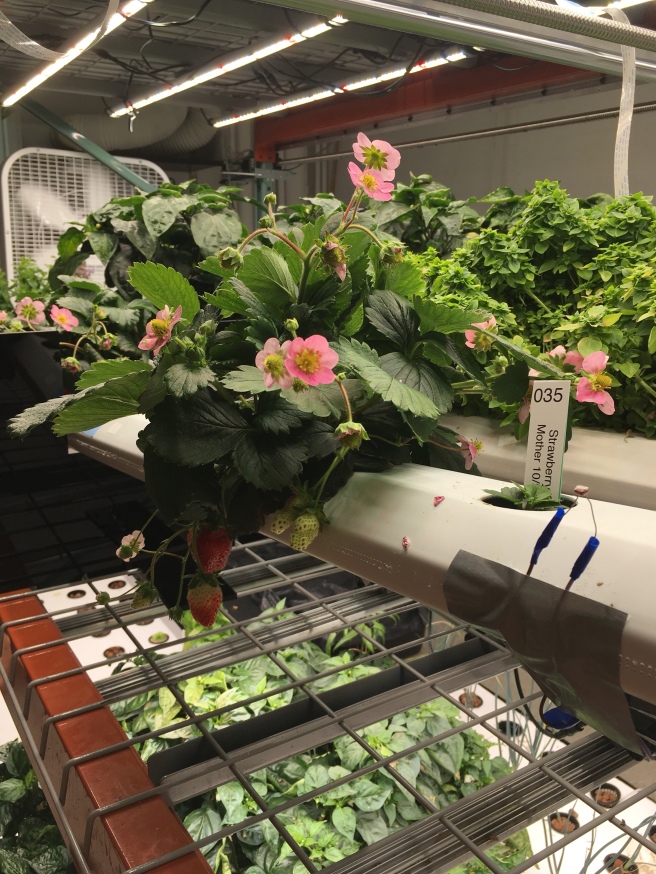 I went back for my 25th college reunion this weekend, which reinforced my belief that college is wasted on the young — or, at least, that the young are wasted in college.

Anyway, unlike Undergrad Me, Alumna Me actually attended a class inside a science building. The topic was vertical farming, an innovative practice of agriculture seeking to minimize the land required to feed Earth’s expanding population. Dr. Paul Gauthier, associate research scholar in plant physiology and environmental plant metabolism in the Department of Geosciences at Princeton University, led an intimate tour of his basement lab, where he grows a closet full of live crops including kale, strawberries, peppers and basil.

Farming in general is not easy, and vertical farming in particular is not cheap. The apparatus of layered growing trays and LED lights cost the Princeton Vertical Farming Project about $10,000 to install. Add in ongoing costs associated with hydroponic nutrient solutions and a 16-hour-a-day supply of broad-spectrum lighting, and PVFP’s experimental vertical farm might be even less economically efficient than my beloved chicken coop. But I sympathize with Dr. Gauthier’s passion for the project.

“My goal is to feed a family of five,” Gauthier says of the PVFP prototype, whose three levels of shelving are a veritable hanging garden of fruits and herbs. “Imagine if you could put one of these in your basement.”

Trust me, I am imagining it. I am imagining that running downstairs to harvest strawberries in December will be every bit as thrilling as traipsing out to the back yard to gather fresh eggs for breakfast. I am imagining it to the point that I’m clearing storage boxes out of the unfinished part of my basement.

I ask Dr. Gauthier what I need — other than the obvious 10 grand — to seed a hydroponic vertical farm in my glorified crawlspace in Nashville. He says to email him and he’ll tell me. I ask him if the artificial lighting is going to land me on some sort of DEA heat map and watch list, and he assures me that the white light PVFP uses does not trigger the same responses from law enforcement that red and blue light has been known to provoke.

Gauthier quotes Microsoft founder Bill Gates’s famously audacious goal of having a personal computer in every house, then explains that his own goal is to have a vertical garden in every house as a way to help ensure food security in a world approaching 10 billion people.

“We want to make it work,” he says, launching into a detour into the complex interactions between science, technology and finance, whose incentives and time horizons don’t always align. Then he points to a daunting graph of ecosystem destruction on the wall beside the vertical garden. “We have to make it work.”

One thought on “Growing Up: Vertical Garden Tour”