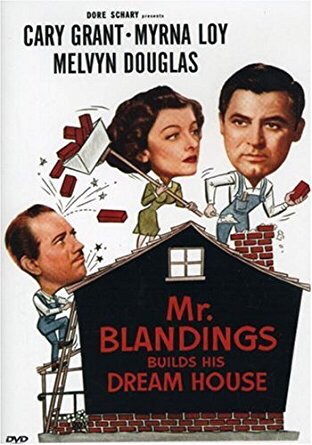 I love a romantic comedy in which a house plays a starring role. The Housesitter, The Secret to My Success, Funny Farm, Something’s Gotta Give, The Holiday, It’s Complicated. I could go on forever—or at least until I run out of Nancy Meyers films—but there are no finer examples of house-as-supporting-actor than The Money Pit and Baby Boom.

Knowing my affection for these shelter-com staples, a friend recently recommended that I watch Mr. Blandings Builds his Dream House, about the comically ill-fated renovation of a money-guzzling rambler.

The plot was familiar: Burnt-out city-dweller trades East Side for countryside, buys a big house and undertakes an overhaul; renovation costs spiral; romantic misunderstandings ensue; bankruptcy looms; dark night of the soul reveals that home is not a building, it’s the people who live inside; but wait, all is not lost, and, lo, house becomes home!

The basic redemptive arc of architecture is the same for Tom Hanks in The Money Pit, Diane Keaton in Baby Boom, and Cary Grant in Mr. Blandings. But the similarity goes beyond simple archetype. About the time Mr. Blandings is negotiating with an infuriating well-digger given to responses of “Yep” and “Nope,” it struck me that The Money Pit is, in fact, a remake of Mr. Blandings; meanwhile, the plumber in Baby Boom is a faithful mimic of Mr. Blandings’s monosyllabic well-digger. A little research reveals that Blandings is even the source for the 2007 film Are We Done Yet? starring Ice Cube.

Of course, movies have changed a lot since 1948, when Eric Hodgins’s 1946 novel by the same name was turned into the vehicle for Cary Grant and Myrna Loy. The black-and-white feature moves excruciatingly slowly at moments, like when Grant shaves in the bathroom mirror in what feels like real time.

And it’s hard to adjust your emotions for inflation, when (spoiler alert) Mr. Blandings’s ill-fated but exquisite architectural project clocks in at a catastrophic–wait for it–$38,000!

Cost of living adjustments not withstanding, Mr. Blandings’s movie is an absolute dream.

Is it as dreamy as The Money Pit and Baby Boom, you ask?

Will the charming cautionary tale put you off wanting to build your dream house? “Nope.”