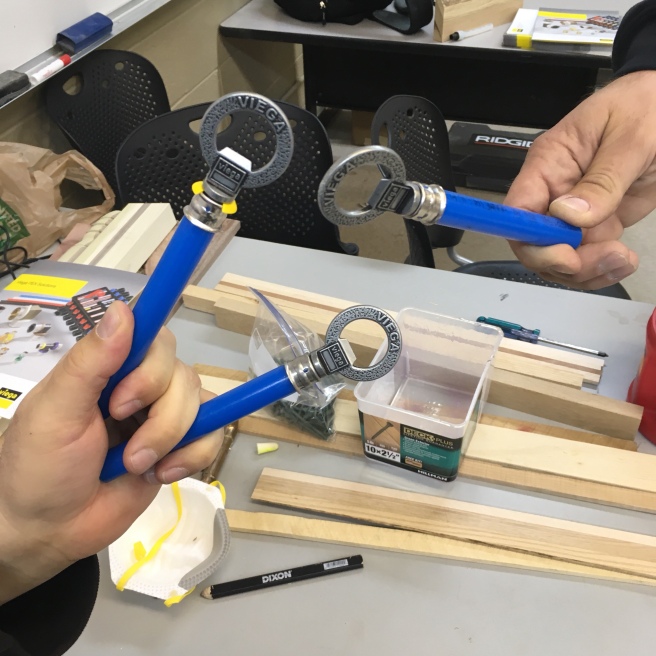 Let me tell you about my new bottle opener. It’s made with the same technology found in much contemporary plumbing—namely PEX tubing.

Short for Cross-Link Polyethylene, PEX tubing is increasingly used in place of copper and other metal piping, because the plastic material is easier and more flexible to install. Rather than soldering or threading rigid metal pipe, which can require open flame and brute force, respectively, PEX systems use specialized tools to join tubing and fittings with much less labor.

Today, representatives from Ferguson plumbing supply company treated our Building Construction Technology class at Tennessee College of Applied Technology Nashville to a PEX tutorial, in which they demonstrated two methods of joining PEX tubing and associated fittings: expansion and compression.

In the first scenario, a specialty device is inserted into the end of a PEX  tube in order to stretch the diameter of the mouth to accept a fitting. (If there were more women in construction class, I am certain that the word “speculum” would have come into play, but in our male-dominated cohort, the glaring gynecological simile went unmentioned. That’s what she said.)

The second scenario relies on compression rather than expansion to join the tube and fitting. In this case, the fitting  is placed over the end of the PEX tube, then the tube and metal fitting are placed in the jaws of a “press tool” that clamps the metal onto the plastic.

Having just spent days…and days…soldering copper tubing—and damn near burning down the classroom—we were dazzled by this method, which was stunningly simple. Simple, that is, except when it comes to paying for the RIDGID brand press tool, which runs about $2,500.

The compression fittings we saw today were manufactured by German firm Viega, which started out in 1899 as a designer of brass beer taps. In order to practice the process of joining PEX tubes and metal press fittings, our visitors let us use make our own bottle openers. (For a video of the process, check out my instagram at @carringtonnfox.)

If I can’t afford a $2,500 press tool, at least I got a free beer bottle opener, which is a very stylish (you might even say “fitting”) souvenir.