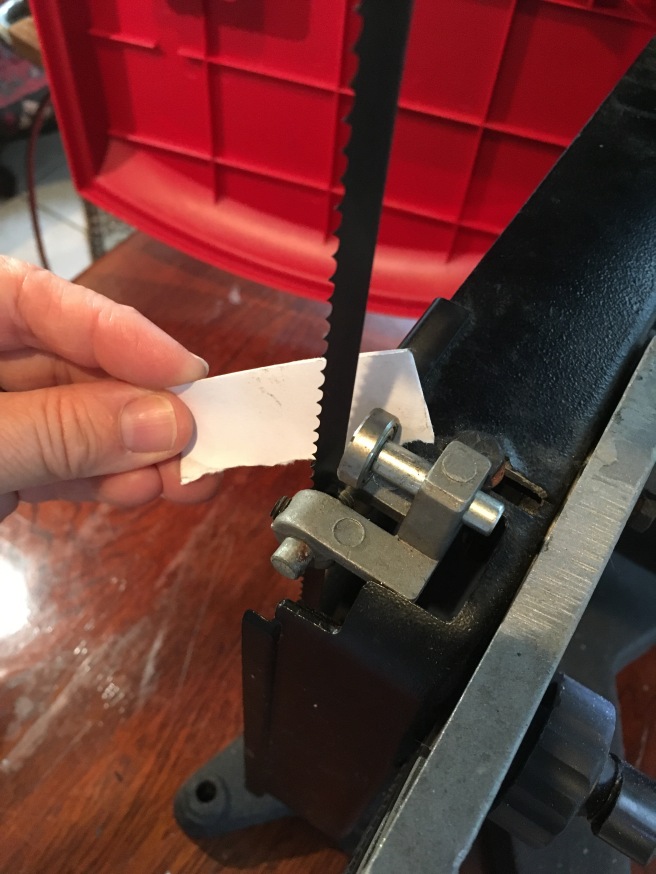 An incredibly thoughtful friend just gave me a band saw salvaged from the garage of “an ancestor.” All signs point to the fact that it was never used, but my band-saw inexperience and general blade anxiety led me to call in quasi-professonal help before plugging in my new toy.

Enter my neighbor, who so often comes to my rescue on matters of DIY. We set the new Skil saw up on my porch, alongside my children’s pet mice*, and started tinkering.

The instruction manual said to position the support bearing 1/32″ behind the blade. We did that easily enough, with the help of a tape measure. But when the manual said to position the blade guides 0.02″ (0.5 mm) on either side of the blade, we were momentarily stumped. There was no mark on the tape measure for 0.02″, and even though it’s roughly 0.01″ less than 1/32″, the manual must have thought that a significant difference, or else it could have given both measurements in loosey-goosey terms such as “just a hair.”

“How are we supposed to measure two one-hundredths of an inch,” I asked my neighbor.

“Do you have a feeler gauge?” he asked.

Now, when it comes to precision instruments, I am more of a Starrett Company fan-girl than you might expect. But in this early phase of my tooling schooling, my wish list comprises more gross-motor machinery, such as a band saw and a DeWalt 20-volt lithium-ion cordless 18-gauge brad nailer, than precision instruments, such as a feeler gauge and a micrometer. My neighbor must have remembered who he was talking to, because he quickly changed his tack.

“Or how about a sheet of paper?” he asked.

As it turns out, a standard sheet of paper is 0.1 mm thick, which, folded in half a couple of times, did the trick. We aligned the blade guides and ginned up the band saw.

Who knew that, when it comes to my tool wish list, the paper it is written on is just as useful as the tools I’m wishing for?

*Please let me know if you would like to adopt two pet mice and all the mousey accoutrements.

One thought on “I’m with the Band Saw”