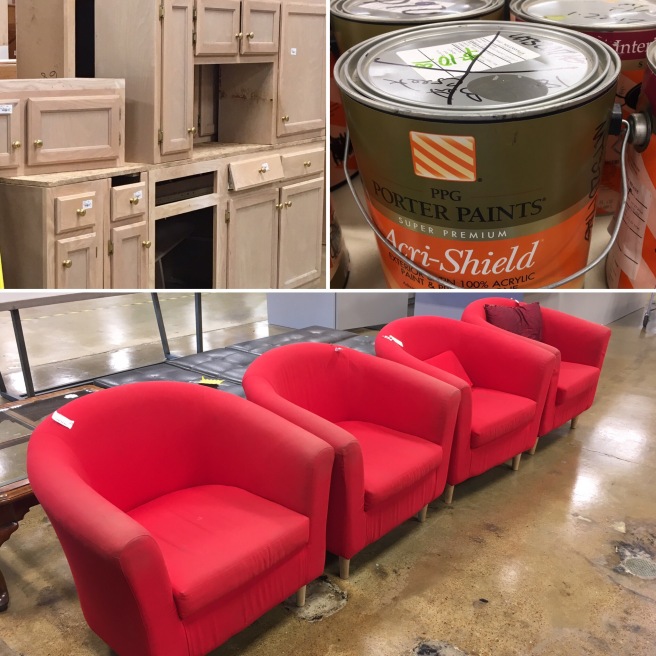 Today’s installment of “Building Shelf-Esteem with Buttercup” kicks off at the Nashville Habitat for Humanity Restore, which opened this month, combining under one 33,000-square-foot roof the homegoods and building materials of two former Nashville Restore locations.

Housed in a former Kmart at the northwest corner of Harding Place and Nolensville Road, the expanded Restore has aisle upon aisle of unused and reclaimed furniture, tools, paint, lighting fixtures, hardware, windows and doors, not to mention boundless parking. Proceeds from the store support Habitat for Humanity’s affordable home building programs.

Bargains abound: Porter Paints for $10 a gallon, Simpson Strong Tie 2×6 joist hangers for $12 per box of 25, and many furniture and building items tagged with prices that drop as the days go by.

For example, need a big chunk of butcher block? It’s $127.50 today, or, if you can wait till September, you can get it for about $60. But that’s a gamble, given the number of SOLD signs attached to piles of club chairs, bathroom fixtures, and sought-after items in good condition.

Still basking in the glow of a life-changing shelving project in my eldest son’s room, I’m now launching into a similar project for my middle son. (I suspect we will see all the vagaries of parenting-as-affected-by-birth-order played out in this room-by-room shelving program, as I progressively become less anxious and more capable at the job at hand, until, ultimately, my third son gets no shelves of any kind. But don’t worry about him. He will adapt to the deprivation of storage as well as he copes with never getting any new sneakers.)

Anyway, I needed some 2×2 furring strips to use as cleats for the shelves that will go in the recessed area of the closet. I dug through the horizontal racks of lumber–which, today at least, was mostly mismatched crown moulding–for about 15 minutes, until I finally unearthed one acceptable 2×2 furring strip.

I had all but given up hope of finding a second, when, behold, the clouds parted and there was a 2 x 2 x 8-foot furring strip, upright and leaning against the shelves, hidden in plain sight, like a giant splinter. Or a needle in a haystack.

Not since I found a lone set of six-million-thread-count king bed sheets by D. Porthault at a TJ Maxx have I felt such a rush. Some people go on safari, to hunt for the Big Five; others go birding, to spot the Yellow-Throated Warbler. Me? I stalk the Habitat for Humanity Restore for Southern Yellow Pine. I guess it’s all about finding your bliss wherever you can.

Today, my bliss was $3 worth of lumber, which, if all goes according to plan, will hold up under the weight of the no fewer than 475 T-shirts my middle son brought home from camps this summer.

Construction begins soon, so join us next time on “Building Shelf-Esteem with Buttercup,” when we return to the Habitat for Humanity Restore because, in all the excitement, we forgot to buy a box of finish screws.

One thought on “Hello, Habitat”