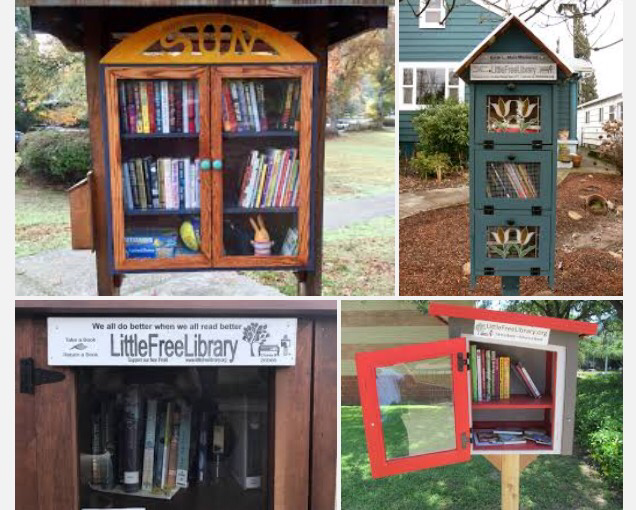 While the guys in construction class build concealed gun cabinets, Big Green Egg grill tables, and a deck for the back of a renovated ski boat, I am neck-deep in the construction of a Little Free Library. To be precise, I suppose I should say I’m neck-deep in the construction of a Generic Front-Yard Book Exchange Cupboard, because I haven’t yet applied for official Little Free Library status from the nonprofit organization that oversees the network of book exchanges. I thought it wise to wait to ante-up the 40 bucks for official designation and the accompanying placard until I actually get the thing completed. I have been known to start projects and not finish them, as my children sweetly remind me.

With God as my witness, I will finish this Little Free Generic Front-Yard Book Exchange Cupboard, if it kills me, because I’ve got too much time invested now. So do the guys in my class, who have “helped” in ways I never could have expected.

While the concept of an honor-system book exchange—along the lines of the twee structures pictured here—was new to most of my classmates, they found it intriguing and quickly weighed in on design elements, such as the depth of the shelf, the choice of roofing material, and the joinery on the inset front door. As a result, my structure—which looks like a mashup of birdhouse and bookshelf—will have pockets screws, cedar shingles and a shelf tall enough to fit Volume I of the latest edition of NCCER’s Electricity textbook.  (Stay tuned for photographs of the finished project in the coming days.)

But where my construction colleagues really have added “value” is in their collective role as literature consultant.

And is met with answers such as this one: “That’s what she said.”

So, please forgive me if I inadvertently invite you to enjoy my exotic library when we cut the ribbon later this summer. In fact, I have no plans whatsoever to lend and borrow erotica from the cheerful carpentry project in my front yard.

As for what kind of literature you can expect to find in my LFL once it’s up and running, that will depend largely upon the generosity of readers who stroll by, taking and leaving books as they pass. As for me, I don’t have time to read. This bookshelf is taking way too long.

6 thoughts on “Check This Out: I’m Building a Library”