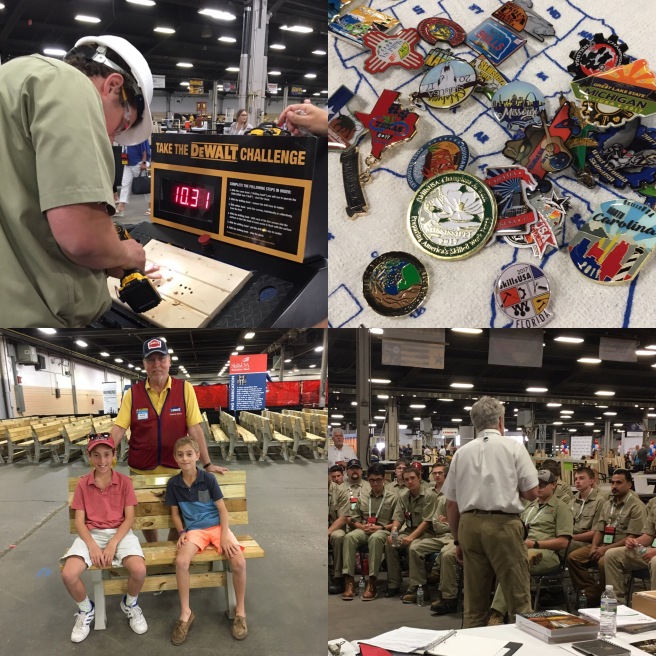 Two of my kids and I just wrapped up the first day at SkillsUSA National Leadership & Skills Conference in Louisville, and we are exhausted. I’m not sure how we are going to rally for SkillsUSA Night at the Louisville Bats game tonight.

Here’s our day by the numbers:

16,000 people from across the country, competing in everything from robotics to manicures

0 pins spotted from Hawaii and Navajo Nation, the most sought-after pins

0 personal encounters with Mike Rowe, who made a brief cameo at the opening ceremonies but managed to escape before Buttercup could embarrass herself by shrieking and hurling herself at him hysterically as if he were a Beatle

1 park bench built with Lowes, to donate to a Louisville nonprofit

1 egg that we successfully wrapped in bubble wrap and dropped from a 9-foot tower without shattering, at the General Electric Maker Space

1 SawStop demo that we are looking forward to seeing tomorrow. I will not believe this hot-dog-in-the-blade sensation until I see it with my own eyes.

$500 tool package from Irwin, plus $500 from Carhartt & a yellow trove of DeWalt tools for the winner of tomorrow’s cabinetmaking competition, in which we are rooting for TCAT Nashville student Maher Farag

3 more baseball hats. (We made it to the Louisville Bats game after all.)

3 exhausted Foxes, having a ball in Louisville

6 thoughts on “By the Numbers: A Day at SkillsUSA Nationals ”