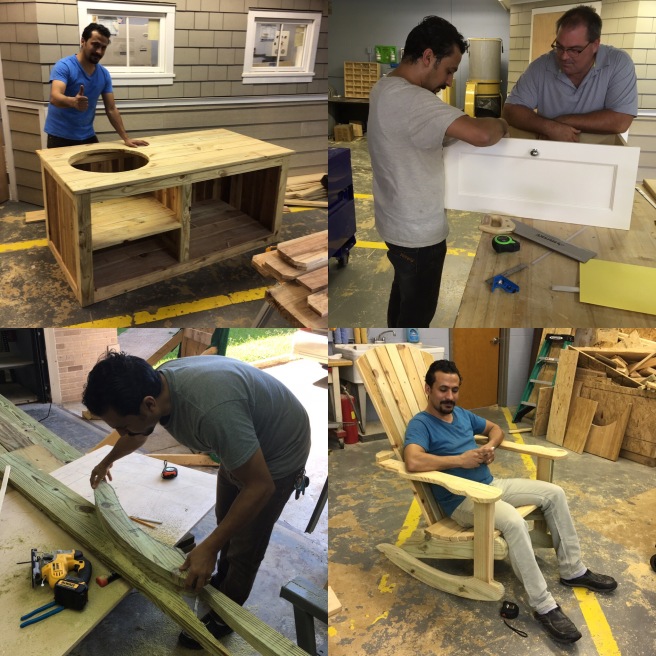 Maher is a brilliant carpenter, who never ceases to dazzle our class at Tennessee College of Applied Technology Nashville with his cabinetmaking skills. He designs complex furniture in his head, without sketches; he improvises power tools when he can’t find the obvious appliance; he is a wizard with a jigsaw.

If Maher is so accomplished, you might wonder what he is doing in class with novices–like me–who are still learning to use power tools. After immigrating from Egypt, where he worked as a carpenter for 20 years, Maher joined our class to learn to speak English and to earn credentials for employment in America.

After school and on weekends, Maher works at the Hermitage Hotel in downtown Nashville. When he’s not working, he seems always to be crafting furniture, whether it is for an innovative shelving system for the hotel or a beautiful crib for his new baby.

While Maher’s English may be tentative, he communicates easily with his generous attitude, always eager to help the rest of us learn. His signature expression is “No problem!” which he uses to reassure those of us who worry about making mistakes in wood.

Maher led our class in the design and construction of the gorgeous barn doors that we built for the campus utility shed. He helped us build Adirondack chairs as a fundraiser for TCATN’s SkillsUSA team. He has been known to use salvaged wood to build children’s toys, coffee tables, barstools, sectional sofas, picture frames, a grill table to house a Big Green Egg….you name it.

Maher earned his seat at SkillsUSA Nationals by outperforming the rest of the class at the Tennessee state championship—but not on his first try. In the Chattanooga competition, cabinetmakers had the use of woodworking equipment that Maher had never seen before. (He says in Egypt he learned to do everything with traditional hand tools, no electrical appliances.) Apparently, he made his first cabinet improperly, and when the judges explained his mistake, he simply made a second cabinet—all in the time it took the rest of the class to complete a single project. Maher took home the gold, and now he’ll compete in Louisville with 16,000 students who come from across the country to demonstrate technical skills in everything from cabinetmaking to robotics.

Recently, Maher and I were drawing pictures on the classroom whiteboard and labeling the items in English, when I asked him if his name means anything in his native Arabic. He was bashful about answering, so we finally resorted to a translation app.