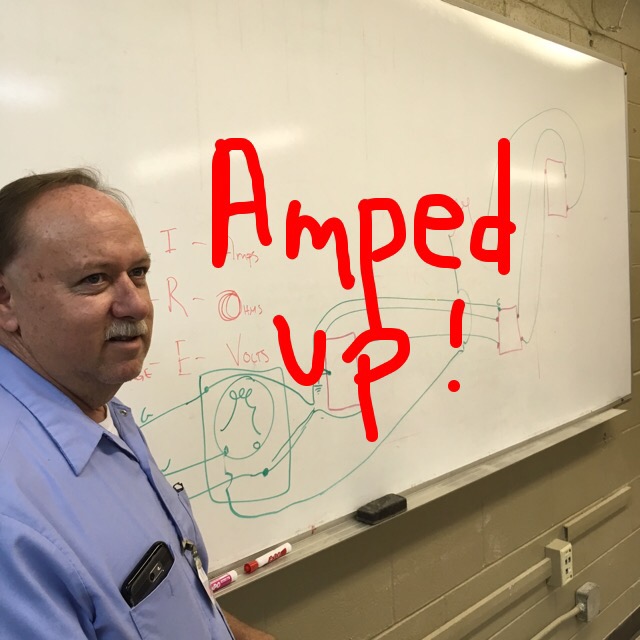 This week, we’ve been wiring a maze of open stud walls with several electrical circuits of can lights, smoke detectors, ceiling fans, and switches. It is hella confusing. I’d say I blew a fuse in my brain, but after several days of tutelage from ever-patient Benny (pictured here, next to the red-and-green spaghetti of wiring diagrams), I now realize a more precise metaphor would be to say that the information load exceeded my intellectual amperage limit, consequently tripping a breaker in my brain panel. Or something like that. It might also be metaphorically appropriate to say that my brain is not wired for electrical work.

Fortunately, when the abstract jibberish of break-the-black-and-green-to-ground all starts to run together, there’s plenty of stuff to work on next-door in the shop, including Adirondack chairs, bar stools, and a cedar table to hold a Big Green Egg. In terms of sports metaphors, I suppose it’s like when you get so exhausted doing upper-body exercises that you look forward to doing squats. Or whatever it is athletic people do.

I never would have expected to seek refuge at a tablesaw, but I guess everything is relative: Even the jagged blade is less terrifying than the prospect of electrocution. That’s not to say that we are practicing with live electricity, but Benny advises that we treat all electrical equipment as if it is hot. That way, we develop muscle memory to avoid the lethal stuff in the first place, without having to wonder and worry about whether or not power is on. As my Marine brother advises, treat every gun as if it’s loaded. OSHA Mom appreciates such an abundance of caution.

I also really appreciate electricians. As much as I want to master the mental gymnastics of calculating loads and wiring circuits, I NEVER WANT TO DO IT IN REAL LIFE, BECAUSE IT IS SCARY. It’ll kill you. So, I will never resent paying top dollar to the people who skillfully and safely help keep the lights and air conditioning on at my house.

I may have told you this one before, but remember the joke about the lawyer who called an electrician? The electrician repaired the problem in 15 minutes and charged the customer $300. As the customer wrote the check, he said, “Wow, that’s steep. That works out to $1200 an hour. I’m a lawyer and I don’t even make $1200 an hour.” As the electrician folded the check into his toolbelt, he said, “Neither did I, when I was a lawyer.”