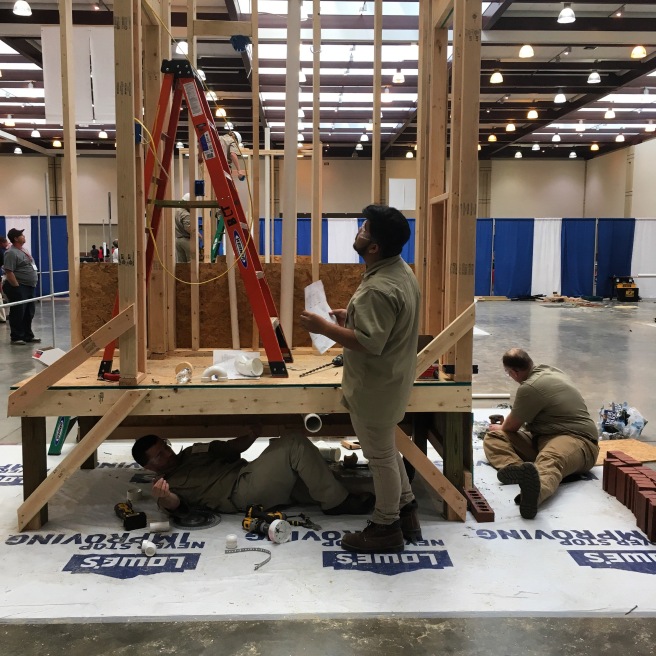 Team TCATN just wrapped up the teamworks construction competition at SkillsUSA in Chattanooga. While we’re still waiting for the final results, it’s no small triumph that our four-person squad didn’t humiliate ourselves. I think I was afraid we’d wire and plumb our structure in such a way that water would spew out and we’d electrocute ourselves. That didn’t happen.

Instead, we built our platform and three walls, with a door and window, then did our best to install electrical circuits, plumbing and brickwork as specified in the plan. And we did a fine job, if I do say so.

One of the highlights of the experience was hearing teammate Jose, 18 years old, hold his own with one of the judges about various electrical codes across the state. His quiet confidence, plus the fact that Jose is about the nicest guy I have ever met, bodes well for his future as an entrepreneur.

Our team mason, John, was also our “cut man,” in charge of the circular saw. I would write down the measurements of lumber that we needed to build the structure, and John would cut the boards. John really likes sandwiches. Every day at school, he eats a sandwich at 10 o’clock and again at 2 o’clock. All that sandwich-making came in handy at SkillsUSA, because our window and door both required three-ply headers made with two 2×6’s with a half-inch slice of OSB in the middle. All I had to do was order up an “OSB sandwich” at the proper length, and John delivered on the double.

Our MVP was team captain Josh, who fearlessly flung himself into plumbing, even though we won’t start learning plumbing until next trimester. That’s the kind of thing my nightmares are made of– plumbing exam, but I never went to class or bought the books. Josh doesn’t scare easy.

When we finished, one of the judges explained how we could’ve improved our plumbing. He couldn’t have been nicer about it. He said that’s why we were here–to learn how to do things better. He said he had been doing this work for a half-century. He learned from a one-eyed man who lost his eye in the Battle of the Bulge. The judge, whose company had done the plumbing in the massive convention center building where we were competing, told us how his plumbing mentor couldn’t read or write, but he could plumb houses better than anyone, and he knew all the tricks.

Then the judge passed a few tricks on to us. I suppose I’ll think of that kind SkillsUSA judge and a one-eyed World War II veteran every time I look at a piece of PVC.

Meanwhile, we will learn the results of our competition tomorrow morning, so stay tuned. Fingers crossed.

3 thoughts on “The Thrills of Skills”