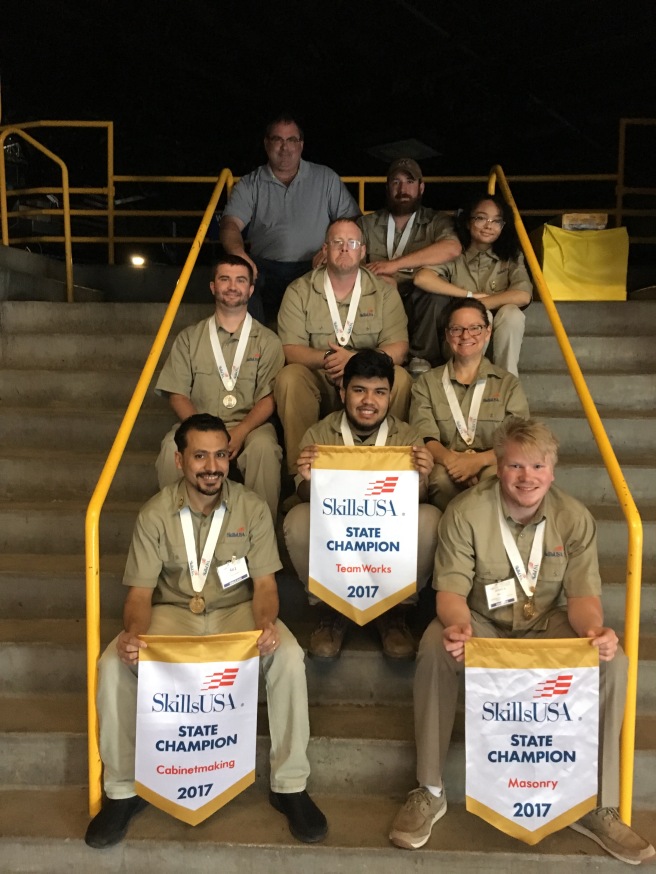 Right about the time I realized we had framed the openings of our SkillsUSA structure at the dimensions of the actual window and door units, rather than at the rough opening sizes called for in the plan notes, that is, right as we realized we had to pull the whole damn thing apart and start over, I would have put money on the fact that our road to SkillsUSA had come to an abrupt halt.

But it turns out…we won! Our four-person squad took home gold in the state-level Teamworks building competition in Chattanooga.

That means we are going to SkillsUSA Nationals in Louisville in June.

Not to diminish our achievement of being State Champions–because I am actually really proud of our work, and figuring out that rough opening glitch was a pretty exciting Eureka! moment, truth be told–but I feel like I should explain that we were the only team in our age group. Turns out the other teams in our event were high schoolers, while we are post-secondary students, and, as my younger teammates like to remind me, I am a thousand years old. So, yes, we won just for showing up.

Our teammate Maher, the brilliant Egyptian carpenter I’m always talking about, won gold in  cabinetmaking. I missed his event because I was dismantling an improperly framed rough opening, but by all accounts Maher built two cabinets then took a nap while the rest of the field was still trying to figure out the hinges.

Josh medaled in individual masonry, also just for showing up, but he did a great job anyway.

Brad was runner-up in individual carpentry, which was possibly the most grueling competition, as he had to build walls of 2×4’s, steel studs, AND mortise-and-tenon 4×4’s, all by himself. And knowing Brad, I’m pretty sure he helped the guy who beat him. So it was great that Brad won a bunch of swag, including a DeWalt drill, a framing square, a massive tool belt, a tape measure and a really swanky hammer.

We were all pretty jealous. Not to look a gift horse in the mouth, but by comparison to Brad’s haul, the Teamworks prize of a $25 gift certificate to a home center and a 50% discount on a pair of work boots (with limited offerings in women’s sizes) seemed kind of thin. I really wanted some tools.

But at least we brought home the hardware.

And rumor has it that you get tons of great swag at Nationals, just for showing up.

Turns out we’re really good at showing up. We’ve got the medals to prove it.