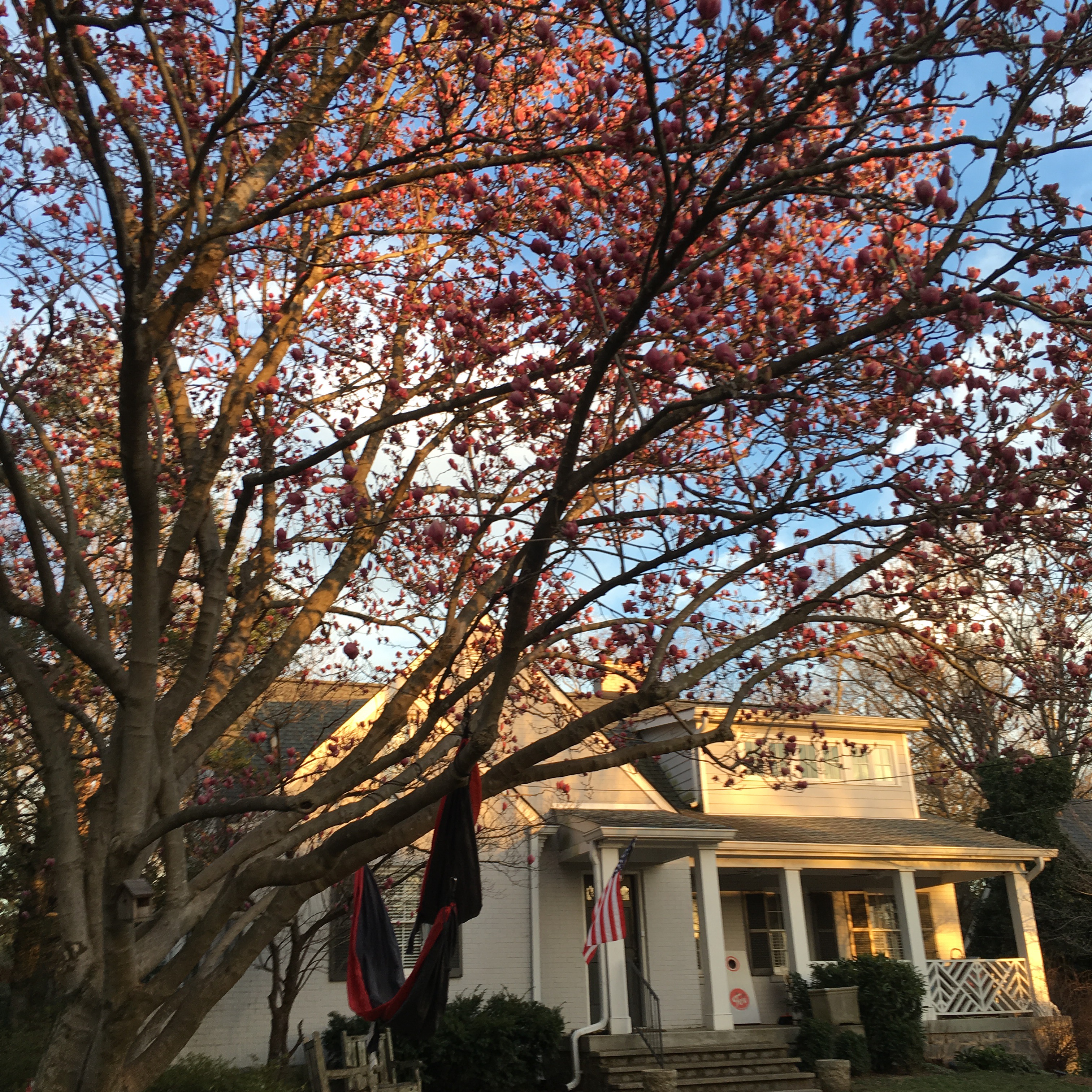 My nextdoor neighbor, who has a better view of my yard than I do, called to tell me the pink saucer magnolia is blooming. That means it’s Pat Hickman Day.

Our family invented Pat Hickman Day to honor the foresight of the man who built our house almost 80 years ago. In addition to constructing a small, no-nonsense Cape Cod cottage in 1939, Mr. Hickman, an engineer whom we never met, planted a saucer magnolia (Magnolia Soulangeana) that would serve as a herald of spring for generations.

Some years, the magnolia gets pinched by frost, but this year it is splendid— pink and pert, cheerfully indifferent to the fact that it is 70 degrees and sunny in February, wholly unconcerned that, at this pace, Nashville will burst into flame by August.

Trees, man. They’re the best. Except for that one tree that broke my kid’s arm. That tree was a leafy bastard. Or, at least, an attractive nuisance. But trees will be trees. And boys will be boys. And somewhere along the way, boys who climb trees will fracture their ulnas.

At this moment, a couple of camping hammocks are dangling from graceful curved branches, below the pink canopy of Mr. Hickman’s Magnolia Soulangeana. This year the pink magnolia will have to carry extra weight, not just because my boys are getting heavier, but because we lost their other climbing tree this year. It was a magnificent sugar maple that Mr. Hickman planted when he built the house. We took the maple down in December, after it shed its final foliage, before it could drop a limb on a boy’s bedroom. We saved three cross-sections from the trunk. We’re still thinking about how to use them.

A few years ago, my neighbor across the street invited me over. She had something for me, she said. She led me upstairs to a small oak desk, with a hinged top that lifts, like a classroom desk, but with a compartment where one might store one’s correspondence and ink. Mr. Hickman’s grandfather made it for him, she said. When Mr. Hickman died in the 1980s and his heirs emptied the house he built, they left the desk behind. The next owners didn’t want it either, so it found its way across the street. She thought it should go back to Mr. Hickman’s house. Did I want it?

She helped me lug the desk across the dead-end street and into my house. We set it right inside the front door. It has not moved since. 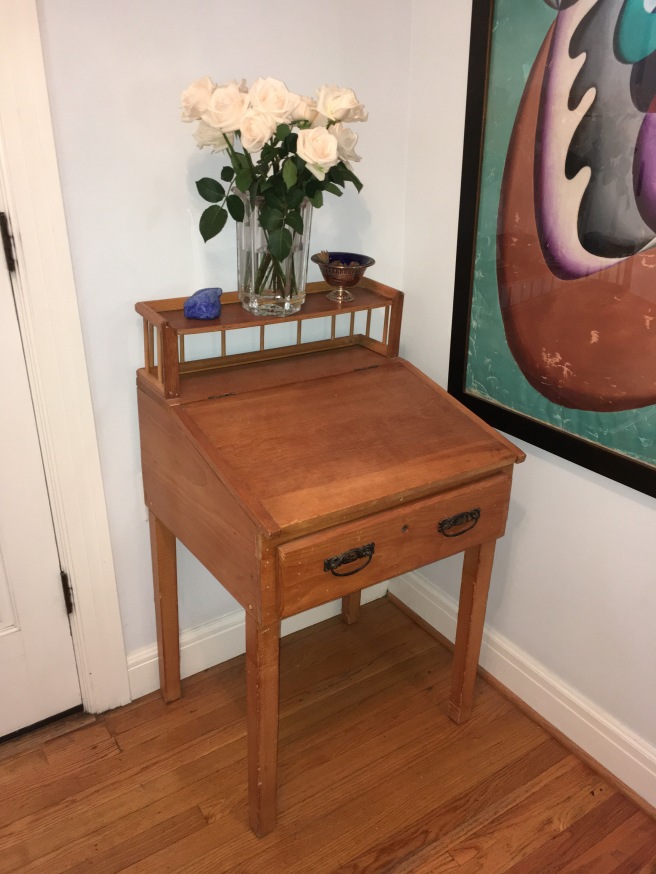 She told me a little more about Mr. Hickman. From a black-and-white photograph she once saw, of a baby dressed in finery and being pushed in a buggy by a member of household staff, she knows that Edward “Pat” Hickman was raised on a farm on the Eastern Shore of Maryland. The farm belonged to his grandfather, who was not a woodworker by trade, but doted on his grandson and built him a lovely, primitive desk by hand. Pat studied engineering at Virginia Military Institute, married Edna, and built a house in a Nashville subdivision known as Myrtlewood—modern-day Whitland—before deploying to Wales in World War II.

The Hickmans were tiny people—my neighbor estimates Pat was 5’7″—so the house was built to scale. Edna’s mother lived with them, in the upstairs bedroom that my husband and I share. After the war, they expanded the house by annexing about 60 square feet of the side porch into the living room, which solves the mystery of the wonky floor seam just beyond the fireplace.

Pat was a well-read, formal and kind gentleman, my neighbor says. He and Edna loved to entertain. They collected Royal Copenhagen plates. They had no children and did everything together, until she had a stroke and moved to a nursing home, where he visited her every day, twice a day, for five years.

It would have been exactly the same, the other way around, if it had been Pat who got sick first, my neighbor says.

Pat loved life. He loved his wife. And, my neighbor says, he loved that tree. She is referring to the pink magnolia that my children are climbing as we speak.

I think about Mr. Hickman a lot these days, as I learn to build things with power tools. Sixteen years ago, when we moved into the House that Pat Built, there was still a workshop in the basement. Big sturdy tables, tiny drawers for bolts and screws, electrical outlets dangling from the ceiling. We were not handy people, so we filled the space with things that didn’t fit into our above-grade life—broken TVs, empty cages of departed pets, sleds that never slid.

Now, all these years later, I am thinking about how to reinstate a workshop. About how to transform dormant storage into creative space. About how to install proper ventilation to remove sawdust. About what to make with three cross-sections of a fallen sugar maple.

Meanwhile, my husband is on the phone with plant nurseries, searching for a tree that will last another eighty years.