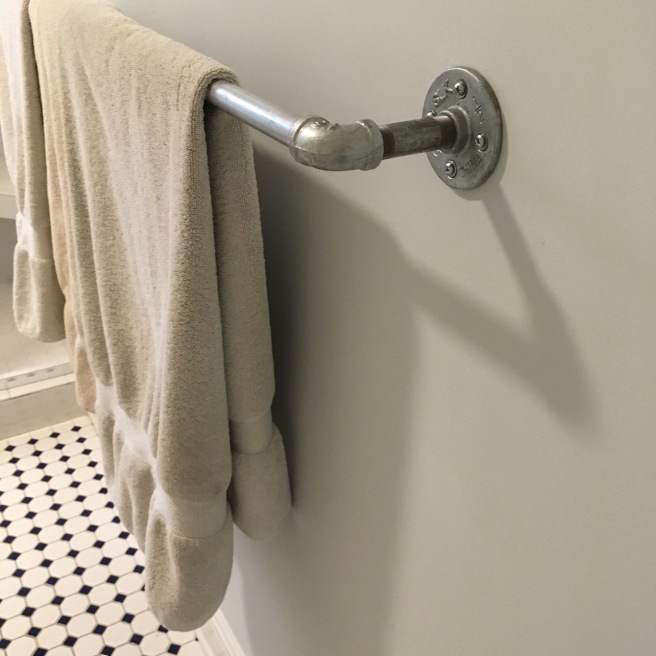 Walls have long been a subject of contemplation. Jean Paul-Sartre had Le Mur. Pink Floyd had The Wall. Today, I’m ruminating on a bathroom wall, trying to explain why it’s blue when all the other walls are beige.

It started with a pair of shoddy towel racks. I’m not pointing fingers, but they were made by a plumbing fixtures company whose name rhymes with “Roller.” Not only were the towel racks so flimsy they collapsed under the pressure of a damp washcloth, they were expensive to install.  So when they inevitably dropped into a heap of chrome uselessness, I left them on the bathroom floor, with no plans for restoration.

For nine years, the presence of perenially mildewed towels on the bathroom floor was no big deal to me. Then last week, for no apparent reason and without warning, IT BECAME A BIG DEAL TO ME, and I found myself screaming the scream of the deranged parent whose life cannot go on like this one second longer because wet towels are the scourge of the Earth, and dammit I raised you better than this, and holy God when did I turn into my own mother, and well, you get the picture.

Fortunately, my kids are used to this. The eldest asked coolly, “Mom, where would you suggest we hang them?”

Fair question. And, with a single trimester of construction school under my tool belt, I was prepared to deliver an answer.

With visions of steampunk dancing in my head, I went to Home Depot and laid out my plan to Tom. (You might remember Tom from the Great Bathroom Sink Restoration of 2016.) He helped me choose the parts I needed for an industrial chic towel rod, and gave me wise counsel to go with galvanized metal rather than the dark iron prevalent on Pinterest. Dark iron fixtures need to be coated or they’ll rust and stain anything that touches them.

I bought two flanges, two nipples, two elbow joints, and a 48-inch section of galvanized 1/2-inch pipe. The whole assembly cost about $35 and is strong enough to withstand an apocalypse.

Back at home, I removed the remaining shrapnel of drywall anchors that had done their part to hold the crappy towel racks in place. When I was through, the wall looked as if a firing squad from Sartre’s Le Mur had been practicing on it.

I spackled the holes, sanded the surface and was preparing to paint over the patchwork, when I realized I had no more so-called bathroom-beige paint nor any record of its actual name or number. I called the paint store. Good news: They could match the color. All I needed to do was excavate a six-inch square of the painted drywall and bring it in so they could make a perfect match.

I do not have that much stamina for drywall patching, but I do have a near-bottomless reservoir of light blue paint.

And that, my beloved children, is how you came to have a beige bathroom with one blue wall and a quasi-steam-punk galvanized metal towel rack that is infinitely capable of supporting the weight of all the towels you could possibly throw on it.

So, hang up your damn towels!

3 thoughts on “Up Against the Wall”