The first week of construction school, I was so amped up on handy self-reliance that I learned to fix a leaky bathtub faucet. So this weekend, when a bathroom sink leaked all over my stash of tiny hotel soaps and sewing kits, I thought it would be a simple fix. Not so.

Feeling rather smug in my new skills, I dismantled the sink faucet handles to replace the seats, springs, and cartridges, but I got stymied when the nut wouldn’t budge off the stem on the hot water side. So solid was the coupling that I wondered if there were even two separate parts.

After much brute force and profanity, I took photos of everything, then drove to Home Depot, where I consulted with Robert and Tom. We discussed several courses of action, including one involving a blow torch, but in the end, they sent me home with two flameless products that might free the frozen nut:

Here’s a picture of my Home Depot purchases: 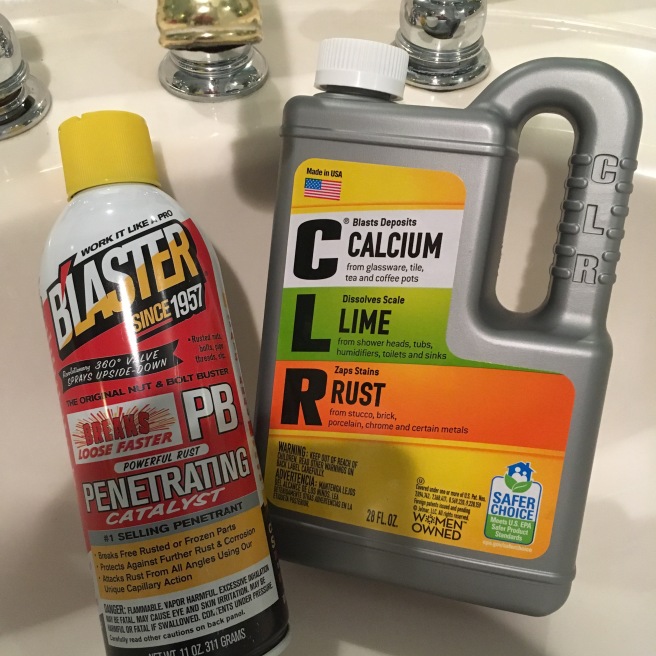 Here’s a picture of the frozen nut:

Here’s what I did:

I wrapped a paper towel (doubled-over a few times) around the nut, like a funnel. I secured it with a rubber band, then poured CLR into the funnel, until the paper towel was saturated and the stubborn nut was doused with the solvent. Then I went downstairs to make some soup. But I digress.

Not a half-hour later, the once-frozen nut spun off the stem like butter. I guess it was calcium or lime. I never even tried the PB.

From there, it was a snap to replace the seats, springs, and cartridges. The hardest part of the project was parting with all my tiny soaps and sewing kits.

3 thoughts on “Plumb and Plumber”